The rules cover the topics

Article 1: The nature and objectives of the chess game

1.1 The chess is played between two opponents who alternately referred to as pieces on a square board, chess board to draw. The player with the white pieces commences the game. A player is on the move , when the move of his opponent has been completed.

1.2 The objective of each player to place the opponent's king attack that the enemy no legal move at his disposal, the one hitting prevent the king in the next move would be. The player who has achieved this, the opponent checkmated and won the game. The opponent who has been checkmated has lost the game.

1.3 If the position is such that neither player in the mögich checkmate, the game is a draw (a draw).

Article 2: The initial position of the pieces on the board

2.1 The chessboard is composed of a 8x8 grid of 64 equal squares alternately light and dark (the white and the black fields). The chessboard is placed between the two players that white on the front page is a player the right corner square.

2.2 At the beginning of the game one player has 16 bright (white ) has the other has 16 dark (black ) characters. These figures are the following:

and a black king

and a black queen

2.3 The initial position of the pieces on the chessboard is as follows: 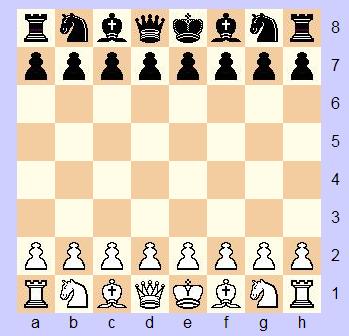 Article 3: The moves of the pieces

3.1 No piece can move to a field that is already occupied by a piece of the same color. If a piece moves to a square occupied by an opponent's piece the latter is captured and as part of the same move away from the chessboard. A character to attack a square if the piece could be on that square according to Articles 02/03 to 06/03 beat.

3.2 a) The queen moves to any square along the file, rank or a diagonal on which it stands.

b) The rook moves to any square along the file or the rank on which it stands.

c) The bishop moves to any square along a diagonal on which it stands.

3.3 When making these moves the queen, rook or bishop can not move over any intervening pieces.

3.4 The knight moves to one of the fields, the field closest to his state, but not on the same line, row or diagonal to it. He does not draw directly on intermediate fields.

3.5 a) The pawn moves forward to the unoccupied square immediately in front on the same line, or

b) he puts in his first two spaces in front of move along the same line if both squares are unoccupied, or

c) he moves to a square occupied by an opponent's piece is diagonally in front of it on an adjacent file, capturing that piece.

d) A pawn attacking a square, which is crossed by an opponent's pawn, who is originally from the field in a move moved forward two squares may capture this opponent's pawn as though the latter had been moved only one square. This capture may only occur in the move that follows such an advance and is hitting called en passant .

e) When a pawn that row, which is furthest from its starting position, has achieved, he must, as part of the same move for a queen, rook, bishop or knight of the same color to be replaced. The player's choice is not limited to characters that have been captured. This exchange of a pawn for another piece is called conversion , and the effect of the new piece is immediate.

3.6 a) The King has two different gaits:

I), he moving to any adjoining square not attacked by one or more opponent's pieces, or

II) he castled . The Castling is a move of the king and one of the rooks of the same color on the same row. It is regarded as a single move, and is executed as follows: The king is transferred from its original square two squares towards the rook, then that rook over the king is away on the field that has crossed the King has just set.

(A) if the king has already moved, or

(B) with a rook that has already been drawn.

(A) if the status field of the king or the field, he must cross, or his field goal by one or more opponent's pieces is attacked,

(B) if there is between the king and the rook with which castling is to be an arbitrary figure.

b) A king is in check when he is attacked by one or more of the opponent's pieces, even if they do not themselves move. A player must not make a move that leads to his king in chess or chess can be.

Article 4: The execution of moves

4.1 The move input is exclusively through the game to display the chessgamble website. The move input will help the : move input explains . Errors in administration of move borne by the respective player.

4.2 Executed moves, which can not satisfy the conditions in Article 3 can not be taken back. Also not in agreement with the opponent.

5.1 a) The game is won for the player who has put the opponent's king with a dull regular modern move. So the game is immediately ended.

b) The game is won by the player whose opponent declares that he resigns the game help: Resign game . So the game is immediately ended.

5.2 The game is a draw (draw) if the player located at the move no legal move at his disposal and his king is not in check. We then say that the player was set patt . So the game is immediately ended.

5.3 The game is drawn by one of two players during the game with the agreement reached Help: Draw . So the game is immediately ended.

5.4 The game is a draw, where, if the identical position has arisen for a third time on the board. So the game is immediately ended.

5.5 The game is a draw given, if the last 50 consecutive moves have been made by each player without any pawn or any figure has been beaten. So the game is immediately ended.

5.6 The game is drawn when a position has arisen in which neither player can checkmate the opponentÃÂÃÂs king with any series of legal moves. The game is said to end in a ÃÂÃÂdead positionÃÂÃÂ. This immediately ends the game, provided that the move producing the position was legal.

The placement of players in a round robin tournament results from the following criteria:

A tournament participant reaches the no placement in the tournament, qualifying for a profit, has lost his bet.

Profits at the same ranked players in a tournament to be divided equally among them.

A tournament starts as soon as the quantity specified in the call number of participants are registered for the tournament. At that moment, start all the games of the tournament and the player with the white pieces are on the move.

There are at chessgamble following thinking time systems:

The thinking time system is selected from the tournament creation and applies to all games of the tournament.
The reflection is always running for the move located at the player (unless he has in correspondence chess holiday, see holiday ). The reflection of the player is not located at the move does not run.
A player who exceeds the waiting period has lost the game immediately.
However, the game is drawn, if the position is such that the opponent cannot checkmate the playerÃÂÃÂs king by any possible series of legal moves.

At the start of a lot begins to think of the player with the white pieces begins (unless he has in correspondence chess holiday, see holiday ).

In this thinking time system, each player has X days for 10 moves. The reflection is measured to the minute at the time of the move.
After every completed 10 moves the player has additional X number of days for the next 10 moves. Not used thinking time from a previous 10-day period will be credited.

In this thinking time system, each player has X minutes for the whole lot is available. The reflection measurement is very accurate at the time of the move.
In quick chess games, there is no vacation.

If a time extension is set for each move, the number of seconds remaining in the dryer tubes reflection of the player is well written.

Each player can take a certain number of days leave per calendar year. For a full year of membership, players at chessgamble to 60 days holiday. In the year of registration with the chessgamble are not registered players per month 5 days less, see Help: Holiday .

While a player is on vacation, is not its reflection in all his correspondence chess games. For quick chess games is not a vacation. I.e. even if a player during a game of chess vacation, running his reflection when he is on the move.

Holidays are the latest to enter the day before the scheduled start of holiday, see Help: Holiday . A day starts at 0:00 UTC clock and ends at 24:00 Clock FAQ . A player is allowed to perform during his holiday moves. Registered leave are the same for all games in all correspondence chess tournaments the player.

8.1 All moves will be checked for correctness on the chessgamble server. I.e. it is not possible irregular moves run. Should nevertheless be made due to a technical error an irregular move, move, or a potential not be executable, players should immediately chessgamble e-mail ( ) Informed. Chessgamble then decide on appropriate action.

Article 9: The recording of lots

9.1 The game progress is recorded automatically by the server chessgamble and can always be seen by the players, the game display. Each lot is documented with all necessary additional data on the server.

10.2 The game results are automatically stored on the server chessgamble and charged in the accompanying table tournament. There they can be viewed at any time by all players, see Help: Tournaments .

11.1 If chessgamble comes to the conclusion that no opponent of corporate efforts to win the game by normal means, or the game could not be won by normal means, the game can be declared as drawn. Similarly, when a position is created, from which Matt by any possible series of legal moves, even with clumsiness game is reached.

11.2 If chessgamble comes to the conclusion that a player is not active on the website anymore, the game can be declared as lost.

Article 12: The behavior of the players

12.1 It is forbidden to harass the enemy at any kind. Harassment can e.g. Zugkommentare abusive or permanent draw his offer.